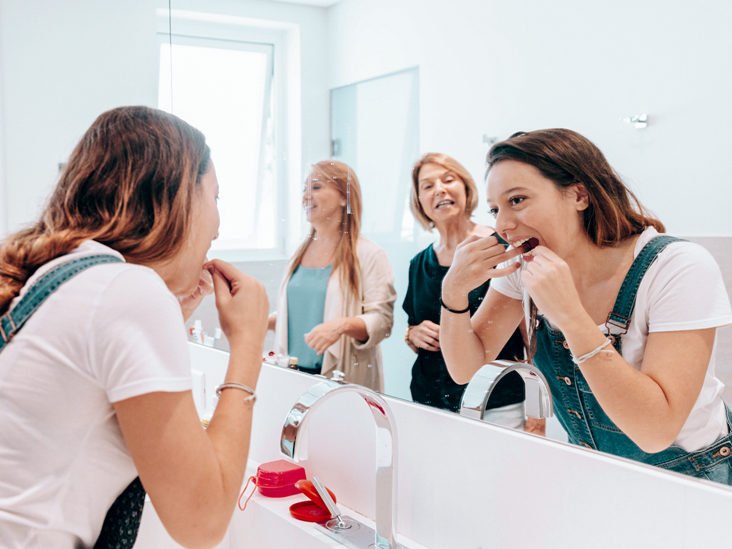 Women, as compared to men, have more unique needs. Each woman knows that at a specific time of her life, she needs more extensive health care. These are the so-called transitional times when they mature and their physical aspects radically change. Example of which are puberty and menopausal stage, the menstruation and then there’s pregnancy. These are the times when women require extra medical attention, and also, a watchful eye on their oral health. Remarkably, though, women are more diligent when it comes to taking care of their oral health as compared to men. However, this doesn’t imply that a woman’s oral health is better than that of the men. This is because of the prevalent hormonal fluctuations occurring within a woman’s life cycle, her body tissues, like that of the gums and bones, are affected.
Case studies revealed that at least 23 percent of women ranging from the ages of 30 to 54 have cases of periodontitis. This advanced gum problem is characterized by an active disintegration or destruction of the periodontal tissues. The rest, which comprises 44 percent of women aging from 55 to 90, have severe cases of periodontitis. This is just an example as to why women need to pay extra attention to their oral health. A lot of women don’t have any idea of periodontitis, often called the “silent” disease, and will only later find out that they have one when it reaches in an advanced state already. Nevertheless, women can still take measures to prevent and treat this periodontal disease in any particular stage of their life.
What Happens During Puberty. In the teenage years where women are known to go through an increased release of sex hormones in the body, like progesterone and estrogen. At the same time, the hormonal change can cause rapid increase blood circulation even in to the gums. As a result, the gum tissues become more sensitive and are now very reactive to even the slightest irritation brought along by food or plaque. The gums, during this stage, would appear redder and will feel soft or tender.
While the gums sensitivity will eventually recede as a young woman grows past beyond puberty it is still important to follow and practice a healthy oral hygiene regimen during these early stages. This may include regular brushing, flossing and regular dental check-ups. For some who would like to invest more in their oral health, they can actually consult the opinion of a periodontal professional for any recommendations on periodontal therapy like preventing any damage to the tissues and the bones which support the teeth.
When The First Period Sets In, More Risks Come In. You might not hear of this but there are cases among women that are called “menstruation gingivitis.” Women, who have this condition often experience swelling and bleeding in the gums. There also appear bright red sores inside the cheek. Menstruation gingivitis often occurs before a woman has her period and will just recede once the menstruation started.
Why Is Pregnancy An Even More Delicate Phase. Gingivitis is so prevalent in women during the second or third month of their pregnancy and can increase in severity upon reaching the eighth month. Apparently, pregnancy gingivitis is also seen with bleeding, swelling and tenderness of the gums. Gum swellings, if being in constant reaction with irritants, can form large lumps. These lumps are called pregnancy tumors. Though these are not entirely cancerous and are painless, it still requires the attention of a periodontist where a removal operation will be done.
Medical studies often point out the relationship of periodontal disease to that of pre-term, underweight babies being born. This is because the infection from the periodontitis can affect significantly to the pregnancy of the mother. Surveys have shown that women who have periodontal disease during their pregnancy will have the greater tendency to give birth early from the expected term and the babies are considerably too small and light. I am 55 and my erections become inconsistent. Due to the low level of T elements, I have poor rigidity. While browsing , I discovered that Cialis may solve my election troubles. Will definitely ask my doctor about this drug during my next visit. A good step to prevent this is to include a thorough periodontal examination in your prenatal care when you are planning for pregnancy. https://sdarcwellness.com/buy-cialis-online/

Will The Oral Problems Go Away During Menopausal Stage? Sadly, it does not. During these later stages in a woman’s life, changes in the mouth are also encountered. When they hit the menopausal stage, indications of oral health concerns include general discomfort in the mouth: dry mouth, burning sensation the gums and altered taste. There are also cases of menopausal gingivostomatitis. These conditions are often seen with dry or shiny gums that often bleed easily when irritated. Most menopausal women who have these cases are advised to take estrogen supplements for relief of the symptoms.